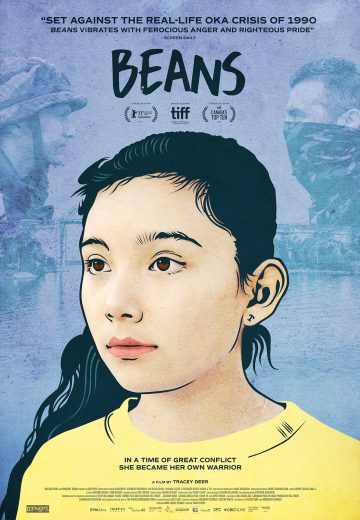 This project goes back a long way for me. I was Beans. I was twelve-years-old when I lived through an armed stand-off between my people and the Quebec and Canadian governments known as The Oka Crisis. The Mohawk Nation of Kanesatake and Kahnawà:ke stood up to a formidable bully - and won. That summer I knew I wanted to become a filmmaker and vowed to one day tell this story.

Mohawk filmmaker Tracey Deer led the acclaimed dramedy Mohawk Girls to five award-winning seasons as its co-creator, director, and co-showrunner. She received four consecutive Canadian Screen Award nominations for Best Direction in a Comedy Series for Mohawk Girls, and she has been honored at TIFF with the Birks Diamond Tribute Award. Tracey's debut narrative feature Beans, a coming-of-age story about a young Mohawk girl during the Oka Crisis that was inspired by her own experiences. She began production after returning from LA, where she was a writing co-EP on the Netflix/CBC series Anne with an E. Tracey chairs the Board of Directors of Women in View, a non-profit that promotes greater diversity and gender parity in Canadian media. She has mentored emerging talent as leader of the Director Training Program at the imagineNATIVE Film & Media Arts Festival, a guest at the National Screen Institute (NSI) New Indigenous Voices Program, and NSI’s new IndigiDocs training course.

Twelve-year-old Beans is on the edge: torn between innocent childhood and reckless adolescence; forced to grow up fast and become the tough Mohawk warrior she needs to be during the Oka Crisis, the turbulent Indigenous uprising that tore Quebec and Canada apart for 78 tense days in the summer of 1990.

BEANS Honoured as One of TIFF Canada’s Top 10