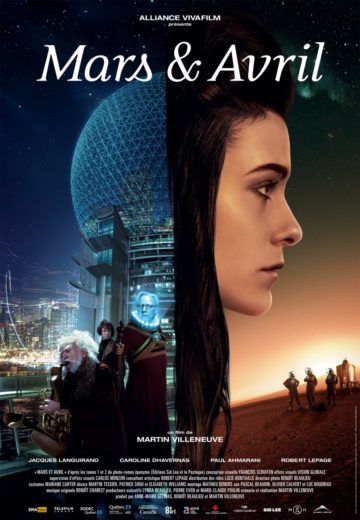 Martin Villeneuve began his career in advertising, working for companies such as Sid Lee and Cirque du Soleil. He directed promotional material alongside music videos and short films in this period while also authoring comic books and photo novels. MARS & AVRIL, his first feature, is an adaptation of his photo novel of the same name, vol. 1 & 2. Premiering at Karlovy Vary in 2012, MARS & AVRIL  was shown in over 20 festivals and was the object of a TEDTalk by Villeneuve in 2013. More recently, he has directed episodes of the television series REAL DETECTIVE.

A surprising photo novel brought to life, MARS & AVRIL takes place in a futuristic Montreal just as humans are preparing to walk on Mars. Prominent septuagenarian Jacob Obus makes music from instruments with feminine curves built by his friend Arthur. Both men fall under the spell of the same woman, a young photographer named Avril. The ageing musician’s true nature will be revealed by his first love and his readiness to follow her to the Red Planet. Eugène Spaak, Arthur’s disembodied-head cosmologist father, will come to Jacob’s aid and help him retrieve his muse.